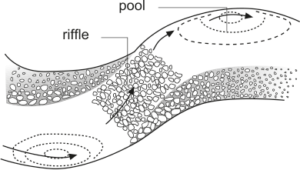 Topographic highs along an undulating reach-scale longitudinal profile. They occur at characteristic locations, typically between bends (the inflection point) in sinuous alluvial channels. Clusters of gravel (up to boulder size) are organised into ribs, typically with a rippled water surface at low-stage. Alluvial riffles are alternating shallow step-like forms that span the channel bed. These sediment storage zones tend to comprise tightly imbricated bed materials, suggesting the action of local sorting mechanisms. They induce local steepening of the bed.

Pools may span the channel, hosting tranquil or standing flow at low flow stage. Alluvial pools are alternating deep areas of channel along an undulating reach-scale longitudinal bed profile. Pools tend to be narrower than riffles and act as sediment storage zones. They form at characteristic locations, typically along the concave bank of bends in sinuous alluvial channels.

Riffles are zones of temporary sediment accumulation which increase roughness during high flow stage, inducing deposition. Concentration of coarser fractions at high discharges (bankfull and above) produces incipient riffles, while lower flows (up to bankfull) may be sufficiently competent to amplify and maintain the initial undulations once they have reached a critical height. In subsequent high discharges, deposition occurs as the resistance of these features induces a reduction in velocity over the riffle surface. At high flow stage the water surface is smooth, as bed irregularities are smoothed out. Riffles are commonly dissected during the falling stage of floods, when the water surface is shallow and steep, and the stepped long profile is maintained. Although very stable, with 5-10 % of the stream area in supercritical flow and some small hydraulic jumps over obstructions, riffles may be mobile at and above bankfull stage. Indeed, they may be removed and replaced during extreme floods, as they reform at lower flow stages (velocity reversal hypothesis).